To Be or Not to Be

Co Writer: Kyle S.
In case you are wondering the co writer is one of my best friends.  Kyle and I have been working together to make this article and maybe more in the future.
I know this is on everyone’s mind.  When on Earth will it be announced if Ryan Braun is suspended or not?  As a Brewer fan I am dying to know if our MVP will return.  I guess we’ll just have to wait and see.
Life without Ryan Braun would be a very hard time on Ryan himself, mentally and physically.  If suspended he might have to  deal with fans 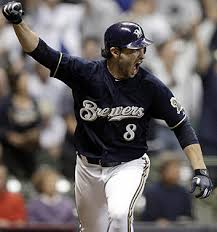 hating him and taunting him.  This might ruin his confidence and make him mentally unstable.  After the 50 games (if the suspension happens) Braun may be very rusty.  It would take some time to come back and perform at a MVP level.  With Fielder gone and Braun possibly being suspended it would leave a huge gaping hole in their line up.  The Brewers may have the talent to win the games without Braun but it will be a lot tougher losing him for 50 games plus loosing that “dynamic duo” that they don’t have any more.   Maybe they would have another duo while their gone that no one expects.  I’m guessing that the signing of Japanese outfielder Norichika Aoki was for this situation.  He will probably be the replacement.  The Brewers may be the only team in the MLB who have a great pitching staff already locked in place and preparing to get better.  This will be the key part of the team if Ryan Braun is suspended.
If Braun is in the lineup for the whole season I think overall they are a better team.  He’ll have some protection with Aramis Ramirez, but not as much as he did with Fielder.  Braun will strengthen the line up and  help the Brewers on their playoff run  It gives Roenicke the opportunity to flex the lineup card with so much outfield depth.  It also allows Corey Hart the chance at first base and the new signing Aoki a spot in the outfield.
I would be very mad to see him get suspended.  This would cause me to dislike him and the other fans would think the same. If he is guilty, I don’t like seeing a cheater on the team.  If he gets exonerated of the charges business would go on as normal.  It’s the panel’s decision.  Will Ryan Braun get justice or guilt?