-David S.-
-Kyle S.-
On this last week of July the LA Angels worked some trade deadline magic to land ace pitcher Zack Greinke. The Angels had to fight hard to stay in the sweepstakes and fight off their divisions biggest test, the Rangers to get their guy. In return the halos had to pay a lot for what some call a 2 month rental pitcher. The back end of the deal consisted off the brewers getting 3 of the Angels top 10 prospects, SS Jean Segura (#2 ranked 22 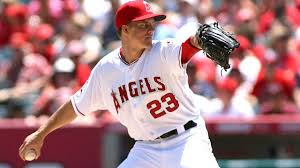 years old) RHP Johnny Hellweg(#4 ranked 23 years old) and RHP Ariel Pena(#9 ranked 23 years old). Being  Brewer fans we have watched Zack pitch many times and the Angels have really got themselves in a good situation landing this player. Greinke also could not be in a better situation pitching behind one of baseballs best Jared Weaver. Then as well the Brewers organization hopefully has lots to look forward to in the long run with these talented 3 players to help rebuild there farm system that the Greinke trade once already took away. The remaining question is can this deal push the Angels to a division title and possibly a World Series? The deal makes sense as of now to everyone and if the Angels make a good run but if the Angels lose Greinke after this short period the Brewers come out winners and the deal turns idiotic that fast. The idea still runs out there that Greinke says he has a chance to re-sign with the Brewers in the offseason. The chances of that seem slim to none right now for that to occur but we are  100% believers that there is a chance. The Brewers will lose a lot of contracts next year opening money for him and anyways we hear over and over he loved it here in Milwaukee. When a quiet guy like Greinke addresses the chance of coming back on a day when he is traded to  a contender you have to think there is a chance. We remember how excited we were when Greinke came to Milwaukee and we think it will be the same for Angels fans. Greinke is a guy that all Brewers fans liked and is a player that we will remember his time here and his contributions to my team he made and we will be rooting for him in LA and he is  a player to admire.

One thought on “Angels Grab Greinke for 3 Prospects, Greinke Resigns with Brewers in Offseason?”