Players have all sorts of excuses as to why they missed a play or didn’t catch a fly ball.    Well, one player from 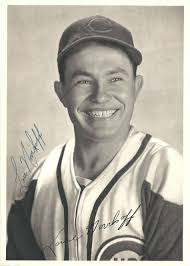 the 1940’s had an odd obstacle to deal with for every home game.  Lou Novikoff, an outfielder for the Chicago Cubs would only chase deep balls a few feet back and let it bounce off of the wall rather than risking contact with the wall.  Furious Cubs manager Charlie Grimm asked Novikoff why he kept letting very catchable balls go.  He fessed up.  Lou admitted he had a truly paralyzing fear of the vines lining the walls and thought that they were  dangerous and “poisonous”  WOW….A FEAR OF GREEN PLANTS ……… REALLY!?!?

Charlie tried to help out his player.  So he rubbed the vines all over him and even chewed up some of the plant to show Lou they were harmless.  Charlie also brought a poisonous vine and compared them to show Novikoff that they were different.  Lou was never able to overcome his strange fear and continued to let balls fly over his head.

LOU NOVIKOFF HAD suffered from BOTANOPHOBIA, A FEAR OF PLANTS.