On April 26, 1975, two protesters rushed onto the field with an American flag during a Dodgers – Cubs game.  The two protesters stopped in center field and tried to light the flag on fire, which was soaked in lighter fluid.  The right fielder for the Chicago Cubs, Rick Monday, saw this happening.  He made a heroic move to charge toward the men. Luckily, the first match was blown out by the wind.  This gave Rick time to courageously save the American flag from being burned as a second match was being lit.  Even though this didn’t happen on the Fourth of July, this goes down as one of, if not, the most patriotic acts in sports history.  Well done Rick, well done. . .  Way to make America proud! 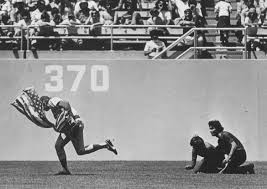 Pics from: www.reddit.com and writemarsh.blogspot.com559