To Trade or Not To Trade: The Case of Jonathan Lucroy

Milwaukee Brewers catcher, Jonathan Lucroy, was already one of the hottest names on the trade market and with his return this year to elite status, everyone has an eye on him.  The tough question for the Brewers is whether to trade Lucroy or not.  Let’s examine the pros and the cons.

Milwaukee’s farm system is already among the best in the league and a Lucroy trade would make it a top 3 farm system with ease. Catchers who rake and field their position well are rare so Lucroy’s value is through the roof.  He is currently hitting  316/.372/.539 as of June 6, with 9 bombs and an OPS of .911 after a DREADFUL 2014. The Brew Crew would receive an elite prospect package, adding to the already impressive group of  players featuring Orlando Arcia, Brett Phillips,  Josh Hader, and Trent Clark.  The Brewers also have the 5th overall pick in the upcoming draft, bolstering the farm even more.  Luc’s contract is incredibly team friendly, making him even easier to move.  The future is already bright, but with a trade and draft here, it gets even brighter, looking at possible young stars. Lastly, Lucroy has expressed interest in being traded to a winning team. 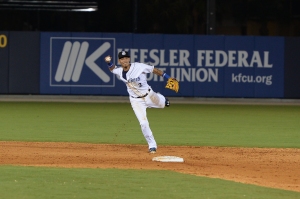 Jonathan Lucroy is a fan favorite with the “LUUUUUCCCC,” chants heard every at-bat.  It’s hard to give up one of the faces of the franchise that is so well liked.  Everyone thought the Brewers were going to be quite dreadful while rebuilding this year, but they’ve actually been playing well. They are working their way back to .500 with only a few games under now.   The bullpen has showed it’s elite with the likes of Tyler Thornburg, Blaine Boyer, Will Smith, and the dominance of closer Jeremy Jeffress.  Jimmy Nelson is coming into his own and looks like he could be a 1, 2, or 3 for the rotation for years to come.  Overall,  the rotation has been serviceable other than the liability of Wily Peralta on the mound.  Ryan Braun has returned to his old self and is having one of the best years of his career.  Hernan Perez keeps hitting his way into the line up and Aaron Hill has heated up since his rough start.  Jonathan Villar has been an absolute stud, hitting over .300, leads the league in stolen bases, and plays an exceptional shortstop.  Lucroy is a core player and a leader.  Finding another catcher like him is almost impossible. He could be vital in developing young pitchers and will be a valuable bat in the line up.  With the revelation of Villar and the elite bullpen, the Brewers could become more competitive sooner than people think.  Top prospect Orlando Arcia will soon be playing gold glove caliber D at short and hopefully Villar gets moved over to second because his bat has to stay in the line up.  A Braun, Phillips, and Domingo Santana outfield could be great.  Josh Hader is showing ace flashes featuring an ERA under 1. It’s hard to put a timeline on young prospects like Trent Clark, but let’s say these prospects I’ve talked about make their way up within 3 years, it could make the Brew Crew competitive.  Lucroy would be a central piece for the years to come if he can be retained.  The Brewers are quietly putting together a solid core that Luc is crucial to.

My Verdict: To Not Trade

I see Luc being  too valuable down the road to trade! The Brewers with their solid play this year may convince him to want to stay.  He is more valuable to the Brew Crew for the years to come to help anchor a line up as well as help develop up and coming pitchers.  He is one of the few “veteran” leaders on the team along with Braun – which also helps sell tickets.  This is an incredibly tough decision that David Stearns will have to make.  Would I be upset if he was traded and they received a great return?  Absolutely not, I  can accept their wanting to position the team for the future.  Either way, there are positives and negatives to keep Luc. Personally, I would miss him – and so would my sister who cherishes his autograph and catches because of him.

What would you do as GM?

4 thoughts on “To Trade or Not To Trade: The Case of Jonathan Lucroy”