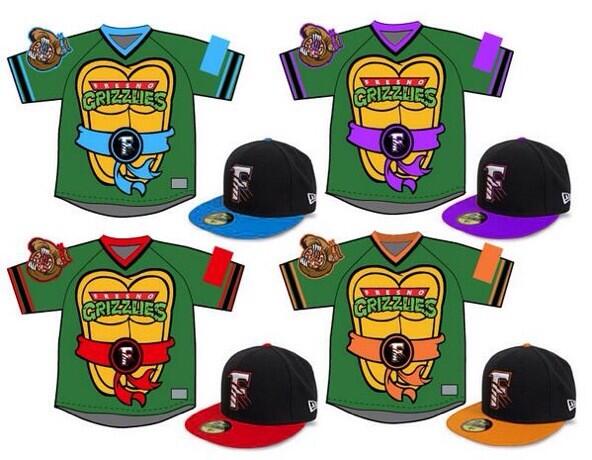 COWABUNGA!!! LOOK AT THIS!!

These jerseys look pretty ridiculous, but the idea is fun and brings about childhood memories for many.  The fans will get to vote on which Ninja uniform that the Grizzlies will wear:  Blue – Leonardo, Purple – Donatello,    Red – Raphael, or Orange – Michaelangelo.  My vote would be Raphael, the red Ninja Turtle!  What one would you vote for?

EVERYTHING IS BETTER WITH BACON!!

Sorry, I haven’t posted in awhile…Things have been sooooooooo hectic! Various projects and some Catholic school basketball tournaments! I want to create a meme that says, “My mom used to be a nice person, until Catholic School Basketball”  – (Love you mom).  I’ve also been pretty darn sick with tons of papers to write.  I know, excuses, excuses……

The Lehigh Valley Iron Pigs are now displaying bacon on their uniforms!!!!! Maybe everything isn’t better with bacon……..

As Soph says, “EVERYTHING IS BETTER WITH BACON!!”

My twin soph said, “EVERYTHING IS BETTER WITH BACON!!”

This new look is pretty ugly, but AWESOME!!!  Putting bacon into a uniform is a ridiculously dumb yet genius idea! 🙂  On MiLB.com it says there will be “scratch-and-sniff” bacon logo t-shirts! How amazing is that…

What if they made bacon pinstripe pants!?!?!……MIND BLOWN!