Sunday, January 27 was the Brewers fan fest, Brewers on Deck.  I got tickets as a Christmas present and have been counting down to this day!  Thank you Santa 😉

As soon as I got there, I had the opportunity to meet Telly Hughes, a Brewer T.V. host.  He was very kind to me and I gave him one of my business cards. Yes, I created a card with my picture on it and, no, I didn’t photo shop those good looks.  After that, straight to the Wily Peralta line.  Wily is a huge Brewer pitching prospect and I’m a fan that thinks he will make positive contributions to benefit the team.   Wily was a decent guy, but  others I met were amazing!  My dad and I waited in line for Brewer’s catcher, Jonathan Lucroy, for nearly 2 hours.  Finally, I met him and gave him a card-something about a card says, “Hey, I’m Legit.”  He seemed genuinely interested in my blog.  My twin, Sophie, is a catcher and probably his biggest fan, so I had him address an autograph to Sophie.   When I gave it to her at home she was screaming super happily!  Jonathan was great!  He took time to speak to me and truly listened rather then just blowing me off.

So, I’m walking around, “Holy Crap Dad, there’s Marco Estrada walking this way!”  I ran up to him all excited!  I definitely didn’t ask for an autograph because his ushers would’ve had a fit like last year.   He listened to everything I said and   He told me that he will definitely check out my blog!  Many other Brewers told me this, but he seemed the most sincere.  I’m not saying the others weren’t sincere, but he really seemed like he was fascinated by a 12 year old kid that likes baseball and writing.  I felt the same way about the bullpen catcher, Marcus Hanel.  I talked to him for like ten minutes!  He is also from my hometown, so we were talking about home and what’s going on.  Turns out I go to school with his niece.  Lucky her, I’m just sayin….. He also accepted a card and just became the coolest and nicest guy from my town that I know of!

The day was wrapping up and I went over to the free autographs and pictures area.   I believe prospects are kinder and more humble because they have less of an ego since they aren’t MLB stars yet.  “SHOUT OUT!” to #4 first-base prospect Hunter Morris, Kentrail Davis, Jim Henderson and Johnny Hellweg.  Those are some great guys!  They didn’t have many people in line waiting so I could  just take time talking with them.

Thank you to the many Brewer players who gladly accepted my card and are reading this now-I would love the opportunity to interview and feature any of these players.  I appreciate your support.  I ‘can’t wait for next year!  What a blast! I can smell OPENING DAY !!!! 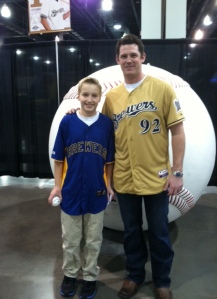 Hunter Morris and me! 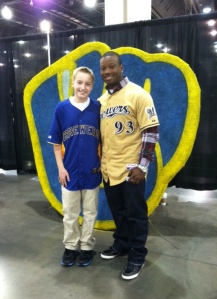 My picture of Lucroy and I wasn’t loading or working correctly..sorry.  I’ll try to fix it soon.