Finally, the stage is set for the 108th World Series.  The San Francisco Giants versus the Detroit Tigers.  The playoffs were exciting and it all comes down to this.  We’re in for a wild ride in this series.

The Tigers just DOMINATED the Yankees in a sweep….OH YEAH!!!!!!!!  A-Rod got benched the last two games and his career as a Yankee is in jeopardy.  The Tigers go in very confident and hopefully not
“cold” from their days off.

The series between the Giants and Cardinals was wild.  Going into game 5 it looked like the Cards were strong and getting in the WS easily with a 3-1 lead.  The Giants never gave up and won game 5.  Then 6….  Hold on, the Giants just tied this things up.  The Cardinals are falling apart, what is happening.  In game 7 the Giants blew away the Cardinals 9-o!    The Giants go into this World Series loaded with momentum and firing on all cylinders.

The best part is that the  two teams that  I hate the most got eliminated! 🙂

This WS could be one for the ages.  Two great well deserving teams are playing and both seem nearly unstoppable right now.  Can the Tigers defend the HOT Giants?  Will the Giants stay hot and defeat the loaded Tigers offense featuring a Miguel Cabrera and Prince Fielder duo.

I say Tigers win in 6 games ( as a die hard Brewer Fan, I’ve got a soft spot in my heart for Prince.)  It’ll be a very dramatic series and I know I’ll be tuned in. 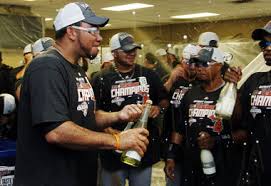 A NEW KING HAS BEEN TRIPLE-CROWNED! WAY TO GO MIGGY!!

Miguel Cabrera of the Detroit Tigers has reached a feat that hasn’t been reached since 1967.  With a .330 average, 44 home runs and 139 RBIs he won the Triple Crown award. No one has achieved this since Boston’s Carl Yastrzemski in 1967. My mom was still in diapers, but I digress….

Great job Miguel!  We’ll most likely see a MVP award also handed to him.  What a year!  Who knows who will ever accomplish this  again.  It’s been a great year in baseball!

Wow.  Prince Fielder and Miguel Cabrera hit two home runs as the Tisers destroyed the Red Sox 10-0.  It looks like Prince Fielder has settled in fine with the Tigers.  I already miss the memories of him hitting massive shots

at Miller Park.  Alex Avila also hit just one homer.  Detroit didn’t like seeing Doug Fister go only  3 2/3 innings with an injury to his left side.  Now Fister is on  the disabled list for 15 days.   All together they racked up 5 home runs.  Josh Beckett got shelled.  He let off 5 home runs and 7 runs.  if you look back to last season he didn’t let his 5th homer come untill June 28.  Not a way you want to start a season for sure.  The loaded Boston line up couldn’t put together any runs at all. Jacoby Ellsbury, Kevin Youkilis, Cody Ross and Mike Aviles have been hitless the first 2 games.  Boston puts itself at 0-2 hoping to bounce back today on Easter.

My cousins and I meeting Prince Fielder

I’m a die-hard Brewers fan and I just heard some sad and disappointing news.  One of Wisconsin’s best sports stars, Prince Fielder is gone.  I couldn’t believe it  until I saw it.  I really thought he would stay in Milwaukee.  Sadly he’ll be on the Detroit Tigers for 9 long years.  The Brew Crew just couldn’t afford him.  At least the Brewers won’t have to worry about playing against him often.  The Brewers are faced with trying to replace not only a great player but a personality that was the face of the team.  His winning smile, intensity and leadership will be missed.  They might use long time prospect Mat Gamel or right fielder Cory Hart to fill that void.  No one can come close to replacing him.  This man was such a kind,  happy  and fan friendly person.   One time my cousins and I were at my sister’s birthday party and we ran into Prince Fielder.  He was so happy to take pictures and talk to us.

Prince Fielder was such a great player and a fan favorite.  He invented a catchy celebration move coined “Beast” mode.  Prince was key in reigning in the younger players like Gomez and Morgan.  With Prince gone and the impending suspension of Ryan Braun, the team will need to rely on veteran Ricky Weeks for some leadership.    I hope he’s happy in Detroit.  Maybe he went there so he could follow in the footsteps of his dad, Cecil Fielder.  Prince did spend many young years in Detroit with his dad.  He could hit a home run when he was 12 years old which shows the power he has.  Detroit has a great player in him and I think the Tigers could possibly make a serious playoff run. The city of Detroit is lucky to have Prince – Please treat him like a KING!  I’m going to miss all those memorable home runs.  What will you miss?