He’s baaaacckkkkkk.  Alex Rodriguez, one of the most hated and dirtiest players in all of baseball is making yet ANOTHER return from a suspension due to steroid usage.  To try to steal our hearts he wrote us a little cliche apology/moving on letter-blah blah blah.  (Actions, Alex, speak volumes!) 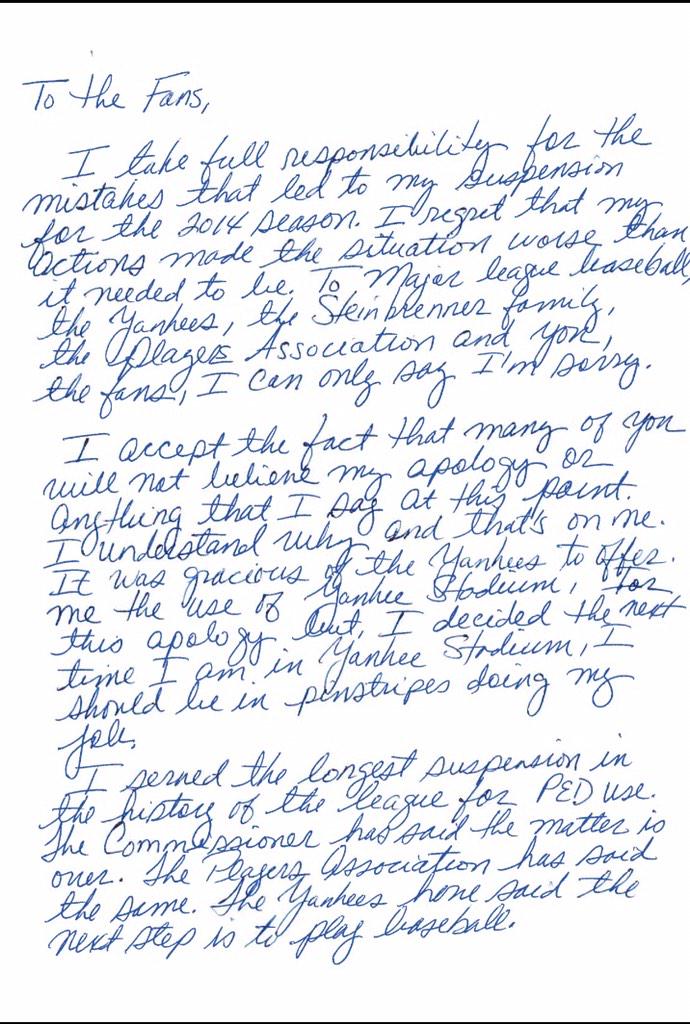 I had only one thought after reading this; his handwriting looks like my sister’s.  I was definitely not the only one who thought it looks very feminine.  An expert of handwriting, Paula Sassi, analyzed it. Here is what she said:

“He writes like a girl.  Feminine writing is more rounded, with a lot of connections, which he has throughout this.  And a right slant.  Masculine writing tends to be more angled, straight up and down, maybe printed.  The capital ‘I’s’—that’s where you see the personal ego.  This is probably what gets him into trouble. He has a very strong-willed, independent ego. They’re so large, and printed. That’s the kind of capital ‘I’ where you say they’re very independent, and strong-willed.  In the second line, when he writes ‘mistakes,’ it’s interesting what occurs in that word, it has a cover on the ‘a,’ and it also happens in the fourth line, when he writes the word ‘situation,’ and both have to do with what happened.  Which is being very protective of personal information.  In his signature itself, where he writes ‘Alex,’ the circle around it, we call that a ‘magic circle of protection.’ So he’s covering his tush. You see it a lot in signatures.”

The expert even declared he writes like a girl!  You can even see his larger than life ego in his handwriting in the ‘I’s’ as she explains.  Additionally, my personal personality expert and relative psychiatrist, Grandpa Ray, says A-Rod’s upward slant is all about confident, successful – moving up-literally.  It’s all about him.  Is that even a surprise?  His ego is so large it jumps off the paper.  Even when A-Roid is trying to be sincere in his “magic circle of protection,” his selfish cockiness shows.  Showing his true colors without even knowing it.  As much as I dislike A-Rod, I wish him the best to get  control of his life.