ONLY 59 DAYS TILL’ OPENING DAY!

59 days until Opening Day everyone!!!  Here’s one of my entries for the Brewers countdown contest! 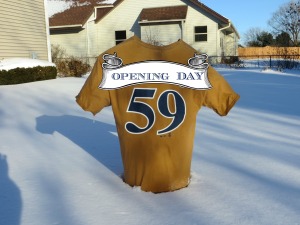 In this BRUTAL winter my mom helped me make this cool project.  In -18 degrees, -35 wind-chill, we froze a shirt.  All you do is dip a shirt in m warm water and hang it outside to freeze for a little while!  Never too cold to be dreaming about opening day!

Something strange is brewing in Milwaukee.  July through August the Milwaukee Brewers were going through some horrible troubles.  The bullpen stunk.  The starting pitcher would  pitch a strong game and as soon as the bullpen came in they would easily blow the game.  Our “go to guys”, John Axford and  K-Rod  couldn’t close a game.  The Ax-man had 8 blown saves and lost his job as closer for a while.    The Crew traded away Zack Greinke, a sign that we threw in the towel.  Everbody was saying it’s just one of those years, but now…………….

On August 6th they found themselves 13 games back of the second Wild Card spot.  Now today they are 2 1/2 games back and are on fire.  The Brew Crew are the hottest team in baseball and no one can stop them.  The bullpen is back and holding the lead, shutting down hitters.  John Axford has finally found his “game” with 33 saves and looks like his old self.  The starting pitching has been absolutely dominant.  Yovani Gallardo has won his last 8 decision and lowered his ERA a ton-maybe it’s the hair.  The rookie starters have been great including, Mike Fiers and Wily Peralta.  Ryan Braun is making serious contender for MVP and Aramis Ramirez is just unstoppable.  Newly aquired shortstop,  Jean Segura, has found his stroke at the plate, and Rickie Weeks is absolutely out of his slump.   THIS IS FOR REAL! – POST SEASON TICKETS WENT ON SALE TODAY!!!!